Home » 1870s » Finished Project- and a Study in Silhouette

This weekend I finished up an elliptical hoop and bustle pad as foundations for future projects.

I have wanted to make an elliptical hoop to wear underneath dresses from the late 1860s to early 1870s.  This is the first hoop skirt I have ever made, and I’m actually quite pleased with it.  It was made from a cotton with a thin brown stripe that I bought at an estate sale, and the hoop wire was salvaged from costume hoops skirts I had when I was younger, as well as some wire left over from when I made my bustle several years ago.   The pattern used was from Laughing Moon #112- Ladies Hoops and Bustles.  This is the second thing I’ve made from her patterns (the first I made was the bodice from the 1890s Sporting Costumes pattern) and I have to say that I am always happy with the end product.  These were very well researched and I enjoyed reading her historical notes, in which she describes her research for the patterns and she also gives suggestions on how to wear them.

I specifically wanted this hoop to go underneath the Truly Victorian 1869 Grand Parlor Skirt.  I had made the skirt a few times before and absolutely loved it.  Since I knew I had a skirt handy that was made from that pattern I pulled it out and tried it with the different ways described in the notes on the Laughing Moon pattern to see what sort of effects could be accomplished with my new underthings.  I was considering using Truly Victorian’s Elliptical Hoop pattern but I thought it would be a little too early for the period I wanted.  I still do want to make that one someday, though!

This skirt is from a Victorian ensemble which was the first somewhat accurate historical costume I made, and I originally made a bustle pad to go under it, which I no longer have. 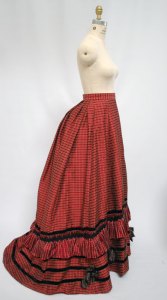 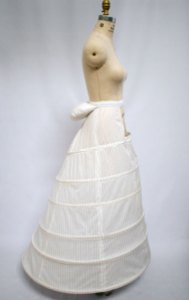 Although the bodice is too small for the dress form, here’s the general idea of what the dress looks like all together with the last option- the bustle pad underneath the elliptical hoop.  It’s like a whole new life for an old dress!

Hope you had a great weekend!

11 Comments on Finished Project- and a Study in Silhouette