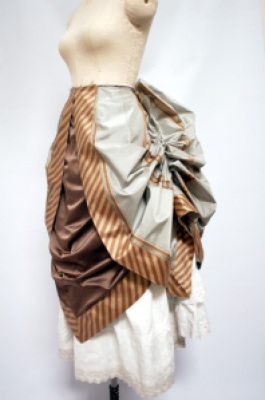 I worked on my bustle dress project a bit last week and got the overskirt mostly finished.  This is from Truly Victorian’s 1884 Wash Overskirt pattern.  It went together very quickly and I just love the drape.  It is very cleverly designed to lay flat for ironing- the drapes are created with ribbons drawn through a casing at the sides, and a tie at the back that will fasten around a button.  This is ideal, as I am planning on wearing this to a costume convention and won’t have to worry too much about it getting wrinkled in transport :) 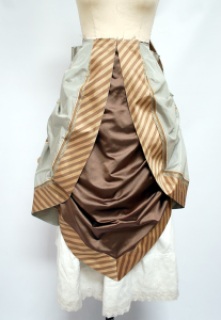 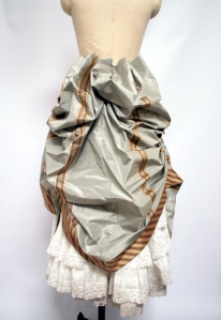 (back of skirt just pinned for photos- I want to get the “poufs” a bit better before tacking down)
I had a grand dig in the ol’ fabric stash, and came out with quite a selection of coordinating tones to decide from for this project.  I have a tendancy to pick up cheap end bolts of pretty fabrics- which is really fun to do, but when it actually comes time for a project I wish I did have a bit of a larger length to work with.  This will be a combination of three fabric lengths and I was a bit iffy if they’d actually work, but I think they do!  The pale blue is a silk taffeta.  I had four yards, which I got for $5 a yard.  The brown is actually a honeycomb pattern and was bought for $3 a yard, and is also a silk but a drapier hand than the blue.  The gold and brown stripe is a silk dupoini, and I don’t remember quite how much it was because I bought it just ages ago.  All in all I have just about 13 yards to play with, which may sound like a lot but it’s really not when making a bustle gown.  I want to do all self trim so hopefully I will have enough to complete my vision (which, of course, has be concocted due to the combination of patterns and lack of excess fabric to play with).

I’ve not been able to work on it the last few days, but just started cutting the underskirt today.  I’ve been really wishy-washy in my plan of attack.  Since I knew I had to use the brown and it was more drapey than the others I thought I would probably need to interline it.  I originally thought of brown cotton from a dye project gone wrong (hey, no one would see it), but couldn’t track it down.  I then found a blue cotton, but it had a tendency to cling to itself which is oh-so-not-good for big skirts.  I finally broke down and am interlining it with a black acetate lining fabric, which should add just a little bit of weight but not weigh it down.  I’m trying really hard to make projects from the stash only, and I had it, so why not go with it, right?
My costumes tend to be a bit modern in terms of construction and such.  While I really admire others ability and desire to construct costumes in a period accurate way, I’m afraid I am a bit lazy (but secretly wish I possessed such desire and dedication to follow through with it).  As long as it’s neat, tidy, and gets the job done, and looks good in the general effect and line I’m a happy camper… so while acetate and rayon seam binding or serging may not be totally period, they work for me.  Well, the serging may be out as my serger needs a new part before it works properly again which I keep putting off because I know it will be pricey!
Now, hopefully I can get a bit more work on this done this week! I want to have at least three big historical costumes (or more) made by the end of July, so I need to stay on track!
The white eyelet peeking through is my bustle- which unfortunately I wore when an extra in a western and try as I might I can’t get the darn thing clean at the bottom!  It’s actually quite heavy so I am considering making a newer one of lighter weight fabric, or maybe just one that goes on the back, not the petticoat and bustle in one.  I could probably selvage some of my pretty trim for the new bustle, too.