Shortly after my blog post on the Big Apple as a fashion craze I ran across an adorable housecoat from the 1940s on Etsy.  The fabric was beyond wonderful- a large apple print in cotton, but the dress had some issues like larger tears, stains, and wear.  Luckily the seller (Factory Girl Vintage on Etsy, who has some other lovely things as well) had a low price on it so I took a chance and bought it to use for a project dress.

First thing was to oxyclean the dress since it had some larger all over stains.  It did get them a bit dimmer, but they are still there.  It’s ok- it’s a casual dress anyways!  The bodice had large tears, particularly on one side of the front- one about 2″, one probably 1″, so the first thing to do was put the dress on and mark where I wanted my hem to be all the way around.  The extra length was to be what I would piece the bodice with.  Next thing was to rip the bodice all apart and have a look.  I ripped out the sideseams, part of the armscye, and removed the waistband after deciding doing a square inset piece (kind of like a faux front yoke and placket combined) was the best bet.   A lot of the bottom was pretty stained and had several larger holes but I cleverly cut around it and pulled out them hem to “make do and mend for Victory”. I wanted it to look more day dress or house dress than robe-like, so the center front skirt got seamed up, the front belt piece was seamed at center front, and I added a zipper to the left side (since it was center front button closing before). 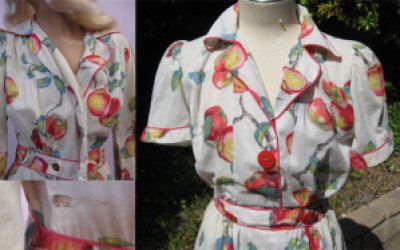 I had to play a little thread mending underneath one of the buttonholes, but I hid it with two large buttons on either side- luckily for me it was a fashion trend of the early 40’s anyways to have big buttons on the waist!  I did kind of mess up one sleeve by making it too short on one side, but oh well… still not too shabby for no pattern combined with laziness!  The sleeves originally had piping around the bottom, so I cut across that and used it as accent for the short sleeves.
I’ve got before (from the listing) and after pictures! Horray! And now I can do the big apple in my big apple dress- although this version is more like 1941 than 1937.  And… I don’t know the dance.

15 Comments on >Make Do and Mend- The Big Apple Dress