>I am a sucker for old movies.  I grew up watching them and I was even named after Lauren Bacall.  I remember as a young teenager telling my friends that I thought the old movie stars were much prettier than today’s actresses.  As time went on I began to notice more and more the clothing in film and now I’ll just as likely be watching the extras in the background and what they’re wearing than paying attention to the actual plot line.
I have many, many, many favorite film costumes.  My vintage film icons are Ginger Rogers, Barbara Stanwyck, Katherine Hepburn, Joan Fontaine, and Myrna Loy.  Each of them has a particular “look”, and I’m drawn to them for different reasons.  Ginger Rogers has playfulness in dress and over the top evening gowns.  Barbara has clothing of tailored lines but still with a sort of sexual allure.  Katherine does well in man tailored dresses and casual wear.  Joan Fontaine has a classic look of understated elegance.  Myrna Loy has pure 30’s sophistication.  There’s clothing I love that falls outside these main stars as well, but those are my fashion icons for their different looks.
Here’s the top film costumes I’d love to make for my personal wardrobe.  Most of these I’ve wanted to make for years and years (or even a decade) but have yet to get the perfect excuse.  I know I’m leaving some out, but here’s my favorites in no particular order. 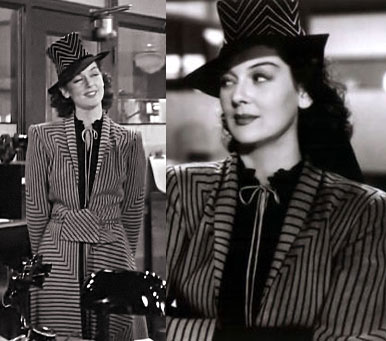 Rosalind Russel’s striped overcoat and hat from His Girl Friday, 1940.  One of my first favorite classic movies and the one that gave me my intro to classic styles I’d actually like to wear myself.  Costumes by  Robert Kalloch. 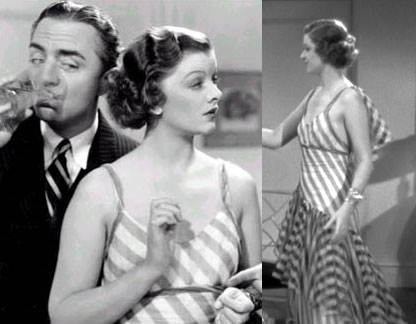 Myrna Loy’s striped dress from The Thin Man, 1934.  I can see this in a white and red striped organza.   A candy cane dress for their holiday party.  I would take ANY of her costumes from this film, but this is tops on my list.  Costumes by Dolly Tree. 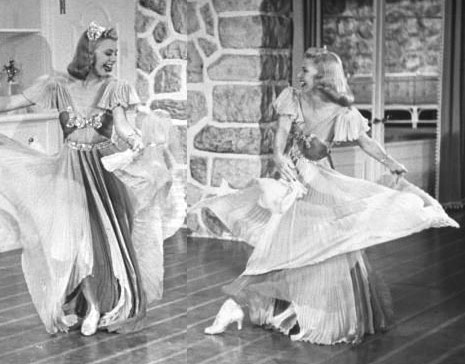 Ginger Rogers dress from “The Yam” number in Carefree, 1938.  I would love to make this in green and salmon starburst pleated chiffon.  Costumes by  Howard Greer.  Funnily enough this is not my favorite of Ms. Rogers gowns, but it is one that I think looks like the most fun to dance in.

Another from Howard Greer for Carefree, this hearts and arrows has been tops on my list since I first saw the movie some three or four years ago.  One of my best girlfriends also has this dress on her “to make someday” list, so we’ll be matchy-matchy. Hehe. 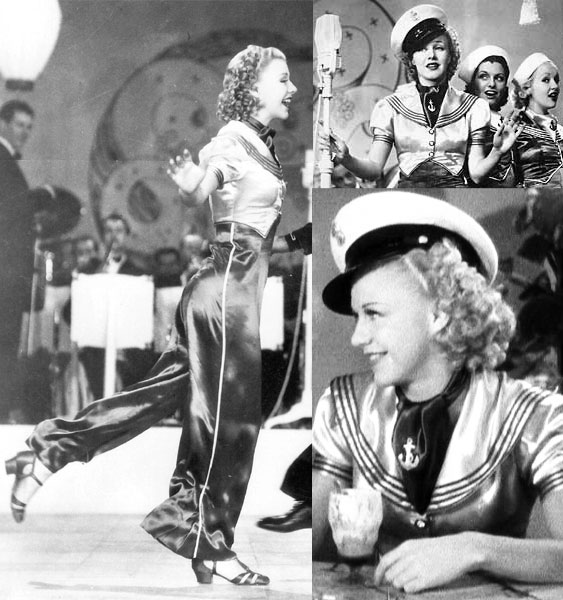 Ginger’s satin sailor suit from Follow The Fleet, 1936.  I’ve actually done all my research on how to make this costume but have yet to make a pattern for it.  I see it in either navy blue or deep purple with yellow accents even though most of the film posters I’ve seen show it as burgundy with yellow or pink.  Costumes by Bernard Newman.

Barbara Stanwyck’s two piece evening gown from The Lady Eve, 1941.  Actually all her clothes in this movie are to die for wonderful.  If I could be entirely outfitted from one movie this one might be top on that list.  I don’t want to hand bead the entire top so when I make this comes whenever I find a black beaded fabric I think will work.  Costumes by Edith Head, who I’m usually not that big of a fan of but this film is an exception.

So what about you?  Any movie costumes tops on your list?  Do we share some of the same favorites?