I have been so inspired for summer wear by the early 1940s, in especially the short called “Fashion Horizons” from 1941.  Here’s the videos from YouTube so you can enjoy these as well.

My playsuit is actually a crop top and skirt that I “finished” about two years ago.  One try-on revealed that the crop top was *way* too short, and whenever I would lift my arms my brassiere would be revealed.  In actuality I didn’t read the instructions and hemmed it one inch where 1/4″ was actually allowed as it was supposed to have a bias binding.  However, even after I took it out and fixed it it was still much too short, so this morning the eyelet ruffled trim was added to the bottom and luckily I had enough to go around the bottom of the skirt as well.  I added yellow rick rack for contrast and to tie it all in together.  I had actually clipped in my corners of the front, so in order to selvage that and still get the extra length I’ve got a bit of  a scallop at center front. 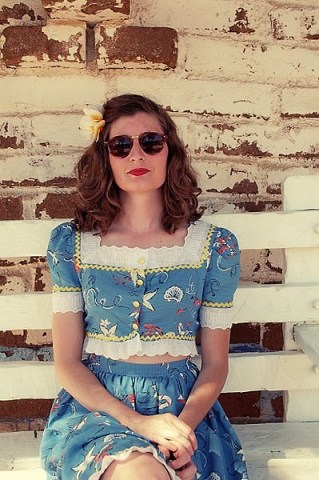 I was rather iffy about the whole thing, but now after trying it on and wearing it for the afternoon I can say I love it and I’m so glad it was selvaged!  The fabric is vintage rayon and the trims, with the exception of some of the rick rack, are new. The pattern I used was Simplicity 4321 (the picture of the outfit before I fixed it to be able to wear it is still up on Vintage Pattern Wiki). This is the second version of this pattern I have made- I previously made the dress. I do like this pattern quite a bit, however, both versions of this pattern have armscyes that are not very practical- lifting the arms causes the whole garment to raise up which can be a bit of a problem with the crop top (thus the ruffled eyelet trim was added). I did make changes because of my eyelet trim on my sleeves and neckline but I don’t remember now what they were. Despite these issues I do still like the pattern and will more than likely make another version of it in the future. Maybe the shorts are next! Too bad I don’t have any more of this fun rayon print! 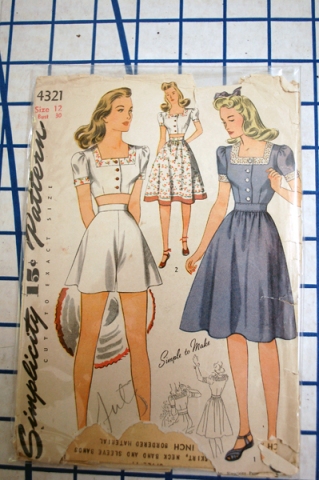