Just as I was gearing up for starting the Edwardian sailor dress (nope, still haven’t even cut into fabric) I have had a wild urge to make a bustle dress.  I blame part of the change in direction from watching the miniseries Lillie– I’m about half way through and I’ve never seen it before.
I’m picturing rustling silks, browns, solids and stripes.  I searched through my old ephemera and couldn’t find any 1880s pictures or magazines which is the era that I happen to be craving right now, but I do have a Petersons bound issue from 1872, where these two images are from. 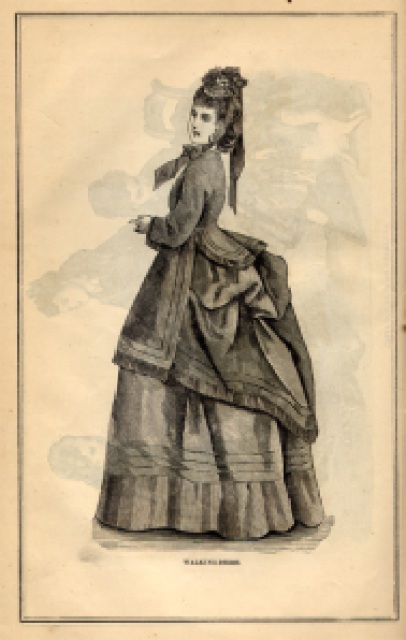 The magazine reads:
“Walking-dress of  Rich Emerald Green Poplin-
The lower skirt is rimmed with one deep but scant flounce, laid in three plaits together, at long distances apart, and trimmed with a band of black velvet, put over straps or velvet, which are pointed at the top and button;  The tunic is short and round, opening in front, and trimmed with a scant ruffle, headed by two rows of narrow, black velvet.  The basque is cut to fall into the figure, is quite short behind, and round at the sides, and is trimmed with a ruffle with a narrow, plaited heading.  The pagoda sleeves and front are trimmed with narrow, velvet rbbon.  Black straw hat, rimmed with black tulle, and mulberry-colored ribbon.” 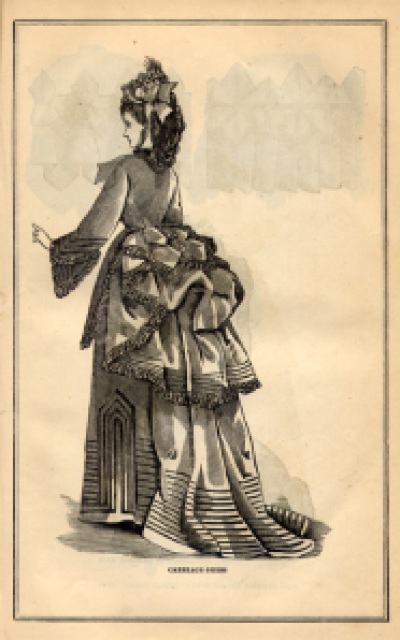 “Carriage dress of black silkt, trimmed with one broad band of black velvet; black velvet polonaise made quite long, turned back from the front, and trimmed with a very heavy passementerie trimming of gimp and fringe.  The ornamentation at the back corresponds with the trimming on the skirt.  Pagoda sleeves.  Pink silk bonnet”
There were two bustle periods in the Victorian era.  There was what’s known as the “early bustle” period, which is the early 1870s (though I think it actually started around 1869), and then there was then Natural Form period, which is where you see fashions like those in the movie Age of Innocence (see screen shots here on Costumers Guide to the Movies), and then again we’ve the second bustle period of the 1880s- which is the more “shelf” type look- not quite the full crazy trimmed plus huge full skirts like the bustles of the 1870s (though some still were- never say “there never was”, right?).  I think the 1880s is what we commonly think of when we think of styles of the Old West.
So yeah… I might just crack into a bustle dress before I come back to the Edwardian sailor dress. A fickle seamstress, that I am.