I’ve always been particularly inspired by women’s sportswear.  I love vintage casual looks!  Here’s a few really cute pictures I’ve collected of a group of gals from the mid 1930s playing around while wearing trousers.  Thought you all might enjoy and use as inspiration for yourselves!

Check out the sheer volume of the pant legs at the gal at the far right.  Gee whiz!  Oxford Bags ain’t got nothing on her!  Also look at the shoes they’re wearing.  Heels for the most part… something I probably wouldn’t do! 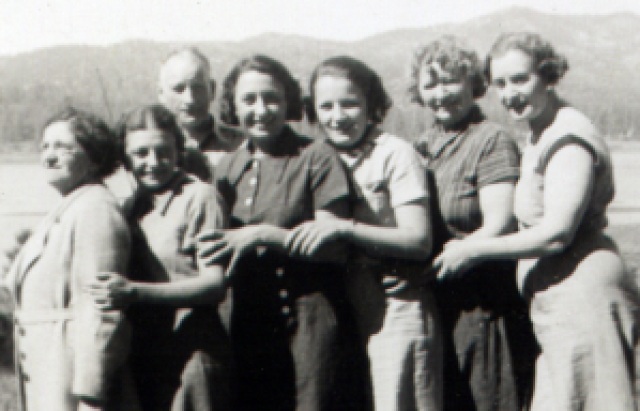 I love this shot so we can see the variations on the blouses they were wearing.  Buttoned to the neck, unbuttoned, striped, yoked, sleeveless, with scarves.  Fun stuff.

Three gals in pretty much the same pair of pants.  Maybe they made them, maybe they all ordered them from a catalog… but see the different fit on the different body types.  Just goes to show ya how one pair of pants can look different on different gals! Also notice the fit- 30s pants fit way different than modern pants and different even than 1940s and 1950s pants.  They were generally more baggy and less figure hugging.  Even though I don’t notice darts in the front there’s a definite drape at the body and they hang pretty straight down with a lowered crotch.  I think the idea was to fit with a similar drape to a skirt but to be bifurcated.  I like the look but it certainly is foreign to a modern gal who fits everything pretty snugly. 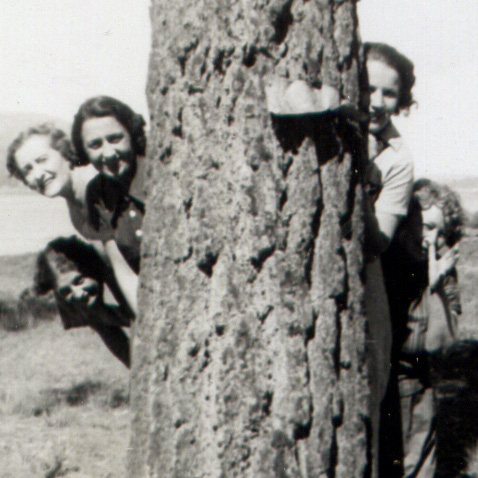 Can’t leave this shot out! Neener Neener- the girls are wearing pants!
Hope you all have a fabulous New Years Eve! May this next year bring lots of fun fashion your way!