I don’t remember when I first caught wind of the new series Downton Abbey, now showing in the USA on Masterpiece Theatre, but I now am so entirely engrossed in the story line and characters I cannot imagine a time it was not in my memory.  That is exceedingly high praise from me for any film or series- as I nearly always say “I like it, but…”

Downton Abbey, contrary to what you might think, is not an adaption of a historical work of fiction but actually a genuinely new and original show altogether.  We enter the world of Downton Abbey in 1912- with a few years until the world was forever changed by the onslaught of WWI.  It’s done exceptionally well.  If you are a fan of British film and adaptions of period novels you will recognize many of the players- including the amazing Maggie Smith (who needs no introduction because she’s that amazing), Brendon Coyle (also in North and South), Jim Carter (also in Cranford), Penelope Wilton (also in Wives and Daughers… and I’ve just noticed all my references are from Elizabeth Gaskell novels) among other recognizable and talented actors. 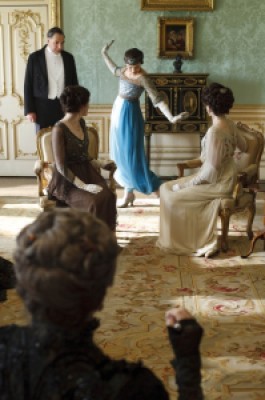 I watched one installment on PBS.com and I was so hooked I immediately went online and ordered the DVD set- and have not stopped watching them since they arrived.  I quickly went through all of them and am now absolutely horrified I need to wait heavens knows how long for Season II.  Yes, they really are that good.
I know, as a reader of this blog, that all you’re really interested in are the clothes- and let me say, they do not disappoint.  One of my favorite moments in the entire series is seen at left, and trust me- this period is so often misrepresented in terms of costumes that I am completely thrilled to see this done accurately and tastefully- even down to detailing as to hairstyle, hats, colors, and textiles.  They even nail something that is often times so difficult to portray- the age differences in the different classes as related to period dress.  We see the older women wearing older styles- the younger ladies wearing the up and coming, and the lower/middle/upper class portrayed extremely well in regards to dress.  It’s thrilling to see this period so accurately portrayed.

Strangely enough it seems many of the costumes were actually previously used in period dramas- here is an interesting article stating a few of the costumes previous lives.  But I’m sorry- as a person who never understood the hype with Finding Neverland I feel that Lady Mary carries off the blue frock with netting and beading much better.  Why are the costumes so lovely?  Many of them came from Angels- a costume house that truly knows their stuff.  When I worked at the San Diego Opera I got to handle many of the gorgeous original period 1910s outfits we had on loan and would have gladly confiscated them for “personal study” if given the chance ;)  Ok, not really- but they sure were lovely to play with.
I won’t give away the story line, but let me suffice to say that this view of the upstairs/downstairs world of Downton Abbey is fascinating, extremely well done, and is something not to be missed.
Now, when are we getting Season II in the US? 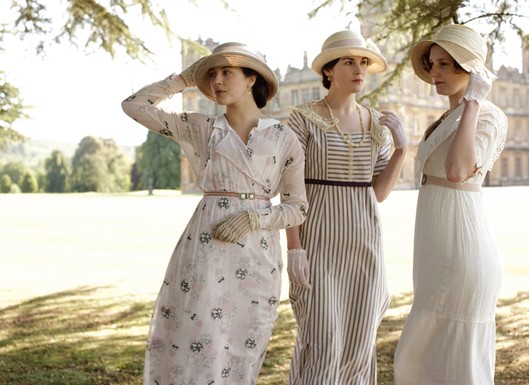 (All images are provided solely for review of the series and are the property of their respective copyright owners.  Wearing History has no affiliation with Downton Abbey or it’s affiliates)