>Luckily my friend who sent the photo I posted yesterday had several more of this little outing. It’s great finding other angles of the same idea, so you can see how it was worn from other angles!

The first photo is a great front view posed shot.  You can see the detailing of the outfits better, as well as her hairstyle which was covered up with a head scarf in the last post.  The girl on the right is wearing a nice casual blouse with wide leg sailor trousers with buttons up the front.  Something to notice, though she probably wouldn’t like it, is the fact that she’s not wearing any compression undergarments.  Also check out how low the rise of her trousers is.  When a modern gal goes to sew her first pair of vintage trousers, she’s in for a shock- at least I know I was! The rise is usually at least two inches below the rise of modern trousers.  The gal on the right is also wearing lace up two tone shoes- I have similar vintage ones I purchased from a friend that date to the 1950s and they were golfing shoes which her husband removed the spikes from.  This style can easily be worn for late 1930s (these are dated 1939), 1940s, and 1950s casual wear. 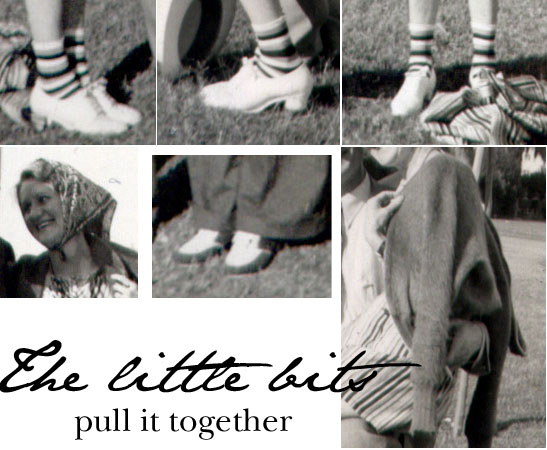 To get more in depth, heres little cropped aspects of dress all pulled apart to pull it together.  Three photos of the girl in the striped playsuit give us three angles of her white lace up oxfords.  If anyone knows where I can find a modern pair like this PLEASE let me know, as I have a project in mind for them, and I don’t want to mess with a vintage pair.  She’s got multicolored striped socks which she wears pulled up and not folded over- very similar to the socks that are in fashion today!  On the lower left we get a close up of her head scarf.  The really cool thing in sportswear of the late 30s was to wear your scarf tied UNDER your chin.  Little details like that can really help an outfit look accurate, even if it seems strange to the modern eye.  We also have a close up of the lady who is in trouser’s two tone shoes, and the cardigan the gal with the striped playsuit has draped over her shoulder.  I have the hardest time finding similar cardigans… most modern cardigans don’t have the nice long set of ribbing on the arm like the ones in the 1930s and 1940s.  I love that this is a side view so you can see what I mean!
Hope everyone has a happy friday and a glorious weekend!
Love,
Lauren